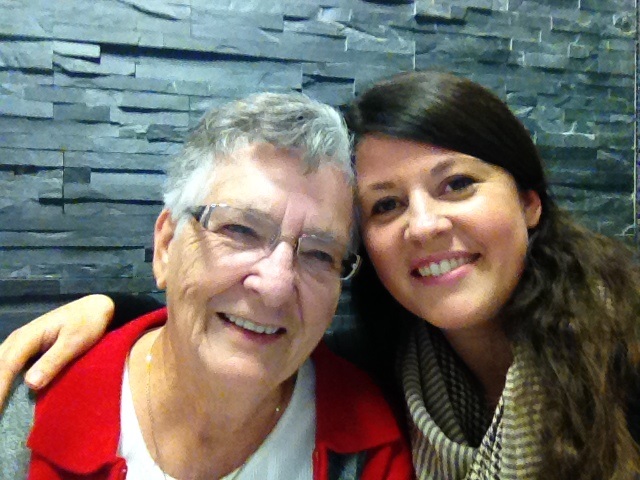 My last remaining grandparent is my grandma, Betty Patton. She’s still a young pup. She’s only 85. I say only because these days, 80 is the new 65 and she’s living proof.  She travels, she’s part of a few social clubs, and she’s always on the go. She owns a beautiful apartment with a patio the size of most flats in London. She would happily share a glass of rum with any visitor and she completely agrees with me that it’s always afternoon somewhere in the world, so a cheeky drink is always acceptable. She also has good genes on her side. Her mother lived until 101.

I was on the phone with her the other day, chatting about motherhood, and I realized how much I didn’t know about how she managed to raise her large family.

As a mom, Betty was a supermom. She had SIX kids. Some would argue that people just had more kids back then. It was the booming post-war years after all, and the baby boomer generation was in full swing. But still…she had SIX kids…I don’t care what era you had them in, that’s a lot of chaos under one roof.

So how did six happen? “Just accidentally,” was my grandma’s answer (with a semi-serious laugh).

“I didn’t know anything about birth control obviously.” (Yeah grams, I think we can agree you missed the memo on that one). “Six kids under 11 and oh my God I thought I’d die.  I didn’t realize at the time but it was absolutely fantastic.”

Grandma…of course you didn’t realize it at the time…I’m surprised you were even semi-coherent for their first 10 years. I shudder at the thought of that many toddlers/kids under one roof – mostly because I find my ONE toddler exhausting- and I won’t even mention my new-born twins.

Betty first fell pregnant with my mother in 1952. She and my gramps (Stan) were in their early twenties.  Money was instantly tight. My grandpa was a printing apprentice at the time so as grandma said, he needed to start earning more money “pretty damn fast.”

There was also my grandma’s dream of finishing her university education that had to be put aside when she started her family.  Juggling a career and motherhood weren’t an accepted practice back in the 50s. Grams attended university in the late 40s/early 50s and majored in French. I honestly didn’t know this until I spoke with her about this post.

“I had to tell my mother that I couldn’t go to my fourth year of university. I had a two year scholarship for year 3 and 4 and I had only used one of them. Me and her both sat down at the kitchen table with tears rolling down both of our faces and wrote the letter to the University of Manitoba that I wouldn’t be accepting my fourth year.”

I can only imagine how frustrating that would have been. Grams was stoic and accepted that a family was her priority for the foreseeable future – even if she didn’t consider herself qualified for the job.

“I never even looked at a baby.  I had never babysat my whole life. I only had three or four friends and we grew up together and that was it. I had only two girl friends and I had lots of little boyfriends and we were all the same age so there was never any babysitting to be done.”

Grandma clearly got the hang of it. Fast forward 11 years and she finally said that was enough. Four girls and two boys.

“I just kept popping them out until I didn’t want any more or I couldn’t afford anymore and that was it.”

Soooo…what was the best form of birth control after that according to Grandma?  “Fortunately your grandpa worked nights for a long time so that helped.”

Always a humble lady, Grams insists that she didn’t do it all alone. Eventually the kids even pitched in.  As Grandma describes her typical day, I realize that a tight network of friends, neighbours and a very involved mother (my great-grandma) was essential to keeping the brood going.

Is anyone else craving a time of no technology, no smart phones and no twitter feeds? When you actually sat on your front steps and had morning coffee with your neighbour?

Sigh. I don’t even have front steps…or neighbours.

I was impressed to learn that it wasn’t all about the kids. The parents managed to have fun and hang on to their youth whenever possible.

“Some of the neighbours went to our church which was helpful,” she continues. “We were with them all the time. Any parties we had, we had the neighbours, you know. We were the original members, your grandpa and I and two other couples of Immanuel United Church. We had parties but you couldn’t have booze in the church so we would take it to a different home.  It was good.”

Grams eventually did get her chance to be a working mom. She had a job at Eaton’s department store in Winnipeg for over 20 years. Again, like a boss, she needed more money and just took her chances one fateful evening.

“Me and Stan (Gramps) were going to meet for supper. It was a Friday night and we didn’t have the money to but we were doing it anyway. We were meeting at Eaton’s and (on a whim) I went upstairs to the 8th floor – the employment office. I met with a man named Author Peabody who was the head of the assignment office up there. He told me to fill out a piece of paper and on it was a question about education and I had 3rd year university (which was a lot back then) and that seemed to be a good thing for me because after he finished with my paper, he turned to me and said, ‘So when can you start?’ and that was it. I was so happy I just about died.”

Grandma’s hours were Monday, Thursday, Friday nights and Saturday all day. She did that every week for 25 years.

Talking with my grandma makes me realize how relatively easy I have it. Yes I now have three kids who don’t stop and the messiest house on the planet to show for it, but to work 4 shifts a week and have 6 kids and a husband depending on you (he still expected dinner on the table each night); that’s seriously impressive.

Through it all, she still thinks she has it easier than my generation!

“I think that I was luckiest because I didn’t have to worry about daycare and things like that. I could just stay home and look after my kids.  Now the kids are all in daycare or preschool and so on, there was no such thing when my kids were young. I couldn’t work until they were all in school. That was it. We didn’t worry about paying for university for the kids, it just wasn’t an option for us. I think I was lucky. I think I had it pretty darn easy.”

Yeah Grams… I’ll have to disagree with you on that one. ‘Easy’ does not spring to mind.

She did run a tight ship though. All six kids were potty-trained by 18 months (!!). I was floored when she told me this. I have a 2 year old and he’s still working on keeping it all in the diaper let alone aiming at a toilet, so potty training is a good year away for us.

“These days kids are going to university still wearing diapers. I probably shouldn’t have trained them that early. My eldest said I made her constipated for life. She was too scared to use the toilet so she just held it in.”

Hey – whatever works Grams and clearly it did. Now I’m going to go knock on neighbours’ doors, ask if they want to hang out on their steps (with rum) and meanwhile make Sam so constipated, that he potty-trains himself. Productive day if I do say so myself. All inspired by Grandma.

Carpe Diem! Grandma you’ve been an amazing mother, wife, grandma and great-grandma. Thank you for inspiring so many of us.